I spent the first several years of my career as a software developer with an incorrect understanding of my default behavioral tendencies. I thought because I was a programmer and loved being a programmer, that must mean I'm introverted - I mean, aren't we all? I also (incorrectly) thought that, because I'm a programmer, I was highly detail oriented since writing code seemed so much more low-level than anything else I had ever done. Every time I found myself in a situation where I needed to exert effort to drill down into the details of a task, or felt drained after spending too much time alone, I became frustrated and couldn't figure out what was wrong.

It wasn't until I started in consulting and was introduced to the Predictive Index that I finally realized what was going on. I'm not detail oriented, not even a little bit. I'm highly dominant/action-oriented and, more confusingly for me at the time, I'm extroverted. In fact, I'm more than one standard deviation strong in most of my behavioral tendencies (which means I'm pretty predictable).

It was around this time that I realized the power of behavioral assessments. Not because they are a 100% correct picture of a human being that will help you fully understand their motives and feelings (not true), but because they help give me a vocabulary with which to understand myself and make sense of the actions people take in the workplace. Now, when I'm coaching others on my team, I can tell them that they are a "Low-D" and might need to intentionally step outside of their comfort zone when having difficult conversations - especially when dealing with "High-D"s. And, more importantly, help them understand the triggers that cause them tension and proactively modify their behaviors when they encounter different situations.

Because behavioral assessments, and their associated vocabulary, have helped me so much in my career, I'm planning on writing several posts around behavior, specifically in the workplace, over the next year and wanted to start off with a foundational post about my favorite personal assessment tool: DiSC (pronounced "disk"). DiSC has helped me become a better employee, leader, and even husband and I hope that some of the information I share here will help you as well. Let's get started.

There are several behavioral assessments, most with a great deal of research behind them. I've taken most of them and my results are largely the same across the spectrum. However, my favorite is DiSC. I like DiSC because it focuses on behavior. And, after all, behaviors are what's important in the workplace. I don't care if you think my idea is stupid, I just want you do do it.

Simply put, DiSC characterizes the behavioral profile of an individual - describing how you generally behave, in aggregate - across four areas: Dominant, Influential, Steady, and Conscientious (some people use Compliant here). These four archetypes compliment and oppose each other in different ways and are typically outlined as a quadrant.

To be "High" in any one of these areas means you tend to exhibit the associated behaviors when you are in your default mode, and it will take conscious effort to behave counter to them. On the other hand, being "Low" in an area means you do the opposite.

I'll outline a quick description of each type here. Note that these are fairly general and very few people fully fit into one specific type, but rather should be considered on the "spectrum" of behavior.

Even if you've never taken a behavior test before, you could probably identify the area (or areas) that you trend towards more often than not.

"But, why is this important?"

I'm so glad you asked.

The key benefit in understanding your personality, and the tendencies of those around you, is that you can work to adjust your behaviors to accommodate who you are interacting with. Ultimately, this is the best way to excel in your relationships with others, making you more successful in every area of your life. 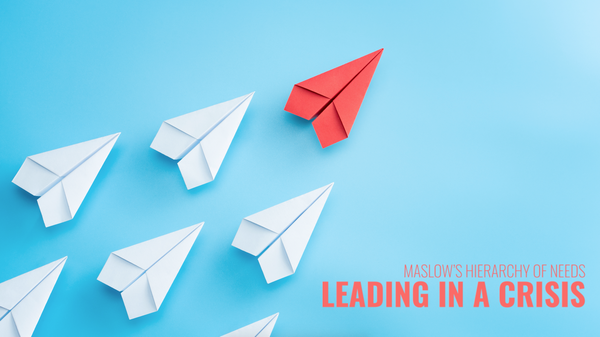 Leading in a Crisis: Maslow's Hierarchy of Needs